TEHRAN (defapress)- Iranian Foreign Minister Mohammad Javad Zarif, in a meeting at the Iranian Parliament on Saturday, reassured that Tehran will undertake the third phase of curbing its commitments under the nuclear deal under the prevailing circumstances.
News ID: 78261 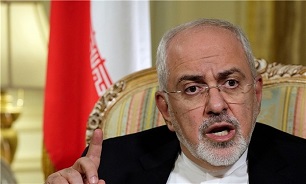 Touching upon Iran’s expectations from the nuclear deal of 2015, officially known as the Joint Comprehensive Plan of Action (JCPOA), Zarif said, “All member states of the Joint Commission of the JCPOA have unanimously reached the conclusion that the US has been the cause of all tensions while Iran’s demands were clear and transparent from the very beginning and Tehran did not expect anything beyond the JCPOA.”

“We have announced that we will partially abide by the JCPOA if it is not fully observed by the other members of the agreement. However, even these moves of us are also according to the JCPOA,” the top Iranian diplomat reiterated.

Referring to the request of not putting into practice the third phase of scaling down of commitments made by the remaining members of the JCPOA, who are now called 4+1, Zarif underlined that it is now within the remit and jurisdiction of the Islamic Republic to whether operationalize the third step or not, "and assuredly this step will be taken in line with the former ones if the other members of the JCPOA fail to meet their commitments".

On Wednesday, Iranian Foreign Ministry Spokesman Seyed Abbas Moussavi warned that his country's two-month deadline that started earlier this month is the last opportunity given to the Europeans to meet Iran's demand to implement their nuclear deal undertakings.

"I think it will be the last opportunity for the nuclear deal parties. We will put into effect the next step if Iran's interests are not met and if they do not do anything special, the Islamic Republic of Iran will not extend the steps anymore," Moussavi said on Wednesday.

He explained that Iran's third step will be stronger than the past two steps, but meantime, said that he is not aware of the details as they will be decided by high-ranking officials.

"Our feeling is that maybe we cannot be lingered anymore. Also, our friends in the region and other places want this and are concerned about the situation," Moussavi said.

He added that if the nuclear deal collapses, certainly controlling the conditions will be hard and tensions will increase.

In return, Iran's Supreme National Security Council (SNSC) announced in a statement on May 8 that the country had modified two of its undertakings under the Joint Comprehensive Plan of Action in return for the US abrogation of the deal and other signatories’ inability to make up for the losses under the agreement, warning that modifications would continue if the world powers failed to take action in line with their promises.

In addition to their defiance of the JCPOA, the Europeans showed more animosity towards Iran and seized an Iranian oil tanker by Britain at the US request.

Spokesman of the Atomic Energy Organization of Iran (AEOI) Behrouz Kamalvandi told FNA earlier this month that enhancing nuclear enrichment levels to 20% could well be the next move by Iran in case Europe failed to provide Tehran with the promised merits under the nuclear deal, adding that enrichment levels stood at 4.5% one day after phase two of scaling down JCPOA undertakings started.

"The level of Iran's (uranium) enrichment has exceeded 3.67% and at present the purity level of the produced materials is nearly 4.5%," Kamalvandi said.

He added that the current level of enrichment fully met Iran's needs to fuel for the nuclear power plants, explaining that they consume enriched uranium with different purity levels up to 5% or less.

He also warned that Iran’s next step within the present course of action that had seen a reduction of undertakings under the 2015 nuclear deal, officially known as the Joint Comprehensive Plan of Action (JCPOA), would be stronger, saying that 20% uranium enrichment was an option.

"Twenty percent is not needed now, but if we want we will produce it. Now that we have gone past the 3.67% enrichment, there won't be any problem with this action," Kamalvandi said.

Options for enriching at higher levels had been discussed with the SNSC, the spokesman said.

"There is the 20% option and there are options even higher than that but each in its own place. Today if our country's needs are one thing, we won't pursue something else just to scare the other side a little more. But they know it's an upward trend," he said.

Kamalvandi said increasing the number of centrifuges was an option for Iran's third step along the lines of the policy of modifying commitments to the nuclear deal, noting that restarting IR-2 and IR-2 M centrifuges was also another option.

The remaining European signatories to the nuclear deal, he said, should act quickly to fulfill their promises because Iran will continue reducing its commitments to the deal until achieving result.

Kamalvandi had announced earlier this month the start of enriching uranium to a higher purity level than 3.67% as Iran's second step to modify its nuclear deal undertakings.

He said that Iran could continue enrichment to the levels that it needs for fueling its power plants, or its research reactor like the one in Tehran University or to fuel nuclear propulsion systems, explaining that each of these needs required enriching uranium to specific levels.

He said Iran at present wanted to produce the needed fuel for its nuclear power plants, but if a new order was issued by the high-ranking officials, the AEOI could further increase the level of enrichment.

Kamalvandi, meantime, said that Iran was not in need of 20% enriched uranium for Tehran research reactor to produce radio drugs for the time being, noting, "We have the needed fuel for several years and are not concerned about the fuel."

Asked about the heavy water reactor in the Central city of Arak, he said that Iran could revive the reactor which was sealed after the nuclear deal but preferred to have a new reactor.