TEHRAN (defapress) - North Korea said the US-South Korean war games are a “flagrant violation” of efforts to reach peace on the Korean peninsula and reflect a lack of “political will” to improve relations.
News ID: 78292 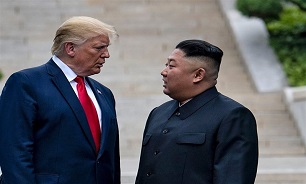 “Despite our repeated warnings, the United States and South Korean authorities have finally started the joint military exercise targeting the DPRK,” the foreign ministry spokesman for North Korea said, according to KCNA.

“This is an undisguised denial and a flagrant violation of June 12 DPRK-US Joint Statement, Panmunjom Declaration and September Pyongyang Joint Declaration, all of which are agreements to establish new DPRK-US relations and build a lasting and stable peace regime on the Korean peninsula,” the spokesman said, AFP reported.

After a year of mutual threats and mounting tension, US President Donald Trump and the North’s Kim Jong Un held a historic summit in Singapore last year, when Kim signed a vague pledge to work towards “denuclearization of the Korean peninsula”.

A second summit in Hanoi in February broke up amid disagreement on sanctions relief and what the North might be willing to give up in return.

Trump and Kim agreed to resume nuclear talks during an impromptu June meeting in the Demilitarized Zone that divides the peninsula, but that working-level dialogue has yet to begin.

Pyongyang warned last week that further nuclear talks could be derailed if Seoul and Washington push ahead with the manoeuvres, which began on Monday.