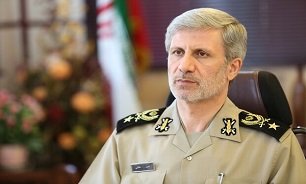 Making the remarks on the sidelines of cabinet meeting on Wednesday, Hatami said “next week, on August 22, we will unveil a useful military vehicle in Isfahan.”

“Good news is also for domestic air defense on the same day, Bavar-373, a new air defense system will be unveiled to present and improve Iran’s defense power," he added.

The ceremony was attended by Minsiter Hatami.

“Balaban bombs is equipped with dual mode GPS/INS as well as folding wings to improve its precision,” Hatami said.

“Yasin is a smart bomb capable of hitting a target located farther than 50-kilometers,” he added.

Describing about modern Ghaem series of missiles, he added that they are equipped with three different types of seekers including thermal ones and can be installed on various air crafts, helicopters and drones.