TEHRAN (defapress) – IRGC spokesman said that downing of US drone and seizure of British oil tanker showed the enemy’s empty power to the world.
News ID: 78308 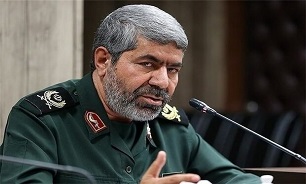 The Spokesman Brigadier General Ramezan Sharif said on Wednesday in Bandar Abbas that the downing of a trespassing US spy drone and the seizure of a violating British oil tanker are successful examples of Iran’s resistance against the global arrogance, especially  the US, adding that it showed the enemy’s empty power to the world.

In June, Iran’s Islamic Revolution Guards Corps (IRGC) said that they had downed a US Northrop Grumman RQ-4 Global Hawk spy drone after it had violated Iranian airspace. Despite US claims that the drone had been flying over international waters, Iran said it has retrieved sections of drone in its own territorial waters where it was shot down.

The UK-flagged Stena Impero was captured by the Islamic Revolutionary Guards Corps (IRGC) on July 19 for violating international maritime laws when crossing the high-traffic Strait of Hormuz in the Persian Gulf.

Iranian officials say the vessel had switched off its GPS locator, in contravention of international regulations, and was sailing into the strategic waterway in a wrong traffic pattern.