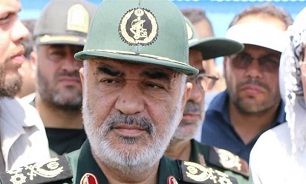 In comments during a visit to Iran’s western border areas on Wednesday, Major General Salami said the IRGC’s strategic might is palpable in every part of the western frontiers, in such a way that there is no concern about ensuring sustainable security at the border regions.

The IRGC forces’ preparedness has thwarted the threatening moves by the terrorist groups who receive supports and orders from the security and espionage services of the trans-regional enemies or the regional ill-wishers, he added.

The commander also noted that the Iranian border guards would not allow anyone to pose a threat against Iran’s independence, territorial integrity and national security.

The Islamic Republic of Iran has turned into a powerful actor in the regional equations and security arrangements, Major General Salami added, stressing that Tehran has gained such valuable experiences over the past four decades that would brook no threat to its security.

The Iranian Border Police, the IRGC Ground Force, and the Army Ground Force are tasked with protecting Iran’s land borders.

Iran has more than 6,000 kilometers of common border with Afghanistan, Pakistan, Turkmenistan, Turkey, the Republic of Azerbaijan, Armenia, and Iraq on the ground.