TEHRAN (defapress) – Iranian Defense Minister Brigadier General Amir Hatami warned against the consequences of a maritime coalition force the US plans to create for escorting ships in the Persian Gulf, stressing that regional security comes within the purview of regional states alone.
News ID: 78324 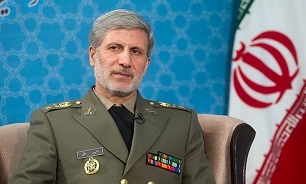 In separate telephone conversations with his Kuwaiti, Qatari and Omani counterparts on Thursday, General Hatami underscored that regional security would be ensured only by the regional countries.

“The military coalition that the US wants to form under the pretext of providing shipping security will only further escalate insecurity in the region,” the Iranian minister said.

Highlighting Iran’s commitment to the Persian Gulf security, General Hatami added, “The Islamic Republic of Iran spares no effort to protect maritime security in the Persian Gulf, the Strait of Hormuz, and the Sea of Oman.”

“Security of the region is a common concern of Iran and the Persian Gulf neighbors, therefore, we believe that security must be provided by the regional countries, who should enter constructive negotiations in this regard,” the Iranian minister noted.

Expansion of ties with the neighbors is a pillar of Iran’s foreign and defense policy, he underlined, saying Iran has always emphasized the need for relations with the “brothers” in the Persian Gulf region, although certain foreign elements have been attempting in the past decades to create a gap between the neighbors.