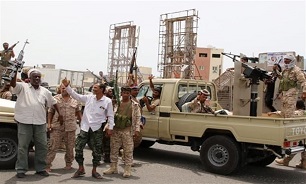 A spokesman aligned with the United Arab Emirates-backed Southern Transitional Council told AFP on Saturday that militants from the group met no resistance when they seized the all-but empty presidential palace from forces loyal to ex-Yemeni president Abd Rabbuh Mansur Hadi.

The announcement came hours after a Hadi government official and local sources said the separatists had also wrested control of all government military camps in Aden after clashes that killed dozens.

"We took the Maashiq palace from presidential (guard) forces without a fight," the spokesman said.

The moves put the separatists in effective control of Aden.

The separatists and Saudi-led militia have been engaged in fierce fighting in the port city, a gateway for commercial and aid supplies, for the past four days.

Doctors Without Borders (MSF), in a statement on Saturday, said the city was "in a state of war" and has ground to a halt because of the fighting.

The humanitarian group said it has treated 119 people in less than 24 hours.

"Most of the wounded are civilians trapped by the fighting and probably victims of mortar fire or stray bullets. Yesterday we treated a woman who had a bullet wound and she was eight months pregnant. At least five people were dead on arrival at the hospital, one of them a child," said Caroline Seguin, MSF's head of programs in Yemen.

"The city's a battlefield. We can hear the sound of heavy weapon fire and tanks are moving around the streets," she added.

Earlier on Saturday, both the United Nations and the UAE called for calm in the port city.

Antonio Guterres, the UN secretary-general, called for an end to hostilities in Aden and urged all sides to "engage in an inclusive dialogue to resolve their differences".

Both the UAE-sponsored separatists and the Saudi-backed pro-Hadi militants serve the Riyadh-led coalition, and have been engaged, since 2015, in a bloody military campaign against Yemen aimed at reinstating Hadi and crushing the Ansarullah movement.

The former president resigned in 2014 and later fled to the Saudi capital.

Ties between the two sides have soured over a number of issues, including what the Yemenis view as Abu Dhabi’s intention to occupy Yemen’s strategic Socotra Island and gain dominance over the major waterways in the region.

Last month, the UAE announced a surprise plan to withdraw part of its troops from Yemen, largely because Abu Dhabi believes the war appears to have become “unwinnable,” according to US reports.