TEHRAN (defapress)- US aircraft are flying over Iraq's territory to collect intel on popular forces across the country, a senior Iraqi expert said, adding that the drone that crashed this week was on a mission to stage a raid on Hashad al-Shaabi forces.
News ID: 78354 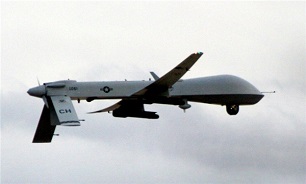 Kazzem al-Haaj told the Arabic-language al-Ma'aloumeh news website on Sunday that violation of Iraq's airspace by the US forces is nothing new.

"The US drones have always flown with the aim of collecting intelligence on Hashd al-Shaabi forces and their controlled areas as well as the regions where the terrorists are deployed to give them protection and security," he added.

Al-Haaj also said the US spy flights come as American army troops have widened moves and stretched their presence towards Syria.

An Iraqi source revealed on Saturday that the US spy drone which crashed in Northwestern Baghdad was carrying missiles.

An informed Iraqi source told the Arabic-language Asharq Al-Awsat newspaper that the surveillance drone, which was armed with missiles, crashed in the farms of al-Rezwaniyeh region in Northwestern Baghdad near the Iraqi capital's international airport on Tuesday.

Asked whether it had come under attack, the source ruled it out, saying it likely crashed due to a technical malfunction.

Meantime, the Arabic-language Boratha news website quoted a military expert as saying that the US was forced to confirm reports of its drone crash in Baghdad after two days.

He noted that the Americans' claim that the drone was unharmed contradicts with its malfunction, saying that it strengthens the speculations that it has been attacked by electronic warfare tools which made it lose the return route and crash near Baghdad.

The revelation that the aircraft was armed with missiles has come to grab media attention as there are still outstanding questions unanswered about an air raid on a military base of the Iraqi popular forces last month.

An unmanned drone on July 19 bombed a base operating by Hashd al-Shaabi (Iraqi popular forces) in Iraq with sources saying two people were wounded.

“The Al-Shuhada base of the Hashed al-Shaabi in the Amerli region was hit at dawn… by an unidentified drone, wounding two people,” the Iraqi military said in a statement.

The source said that the spy plane carried out reconnaissance operations over Sanjar mountain and the Southern areas of the region.