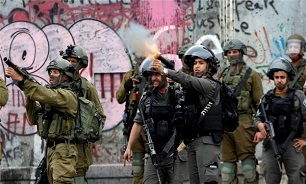 Violence erupted on Sunday morning after Israeli policemen fired stun grenades and tear gas at the Palestinians who had finished their Eid prayers, presstv reported.

The Palestinian Red Crescent announced that it was treating several wounded people inside the al-Aqsa Mosque compound, which lies in the Old City of Jerusalem al-Quds.

The Israeli forces also arrested a number of Palestinian worshipers.

Israelis had been barred from entering the holy site to observe the fasting and mourning day of Tisha B’Av, which coincided with Eid al-Adha this year.

The al-Aqsa Mosque compound is usually closed to non-Muslim visitors during Muslim holidays, but as the holidays overlap this year, some Israeli organizations had appealed to the regime to allow Jewish visitors into the site.

On Friday, the Islamic Waqf (Endowment) organization, which oversees the site, urged Muslim worshipers to crowd the al-Aqsa Mosque to keep Israelis from visiting.

“Don’t leave the al-Aqsa Mosque as prey for settlers who are gathering next to the Mughrabi Bridge,” it announced.

The Jewish visitation of al-Aqsa is permitted, but, according to an agreement signed between Israel and the Jordanian government after Israel’s occupation of East Jerusalem al-Quds in 1967, non-Muslim worship at the compound is prohibited.

The site is sacred to both Muslims and Jews.