TEHRAN (defapress)- Pakistani Speaker of the National Assembly Asad Qaiser, in a telephone conversation with Iran's Parliament Speaker Ali Larijani, urged Tehran to help find a peaceful solution to Kashmir conflict amid a fresh wave of tensions between New Delhi and Islamabad over the disputed region.
News ID: 78358 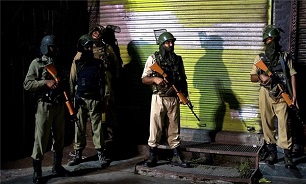 During a phone conversation on Saturday, Iran's Parliament Speaker Ali Larijani and Pakistani Speaker of the National Assembly Asad Qaiser exchanged views on the latest development unfolding in the disputed Himalayan region.

Qaiser expressed hope that Iran would employ all its regional and international capacities to help ease tensions in Kashmir.

He described the Islamic Republic as a friendly and brotherly country of Pakistan, saying Islamabad considers Tehran a key party for consultation and interaction in tough times.

Larijani, for his part, said the Kashmir issue needs to be resolved through diplomatic approaches.

Stating that Iran is closely monitoring developments in Kashmir, he underlined the necessity for the resolution of the dispute based on UN resolutions.

In a Thursday tweet, Senior Advisor to the Iranian Parliament Speaker Hossein Amir Abdollahian urged New Delhi and Islamabad to put the issue of Kashmir into a regional perspective, saying that regional efforts can resolve the issue through dialogue and peaceful means.

Amir Abdollahian said that Iran is “deeply concerned" about the escalation of tensions in Kashmir, highlighting that the situation in Kashmir doesn’t have a military solution.

“[We] welcome peaceful means and dialogue for securing interests of people in Jammu and Kashmir and resolving the crisis. Kashmir has no military solution,” he added, stressing that regional and international approach, specially under the OIC initiative is “a must”.

On Wednesday, Iranian Foreign Ministry Spokesman Seyed Abbas Moussavi called on New Delhi and Islamabad to exercise self-restraint and try to resolve their dispute over Jammu and Kashmir.

“Iran expects India and Pakistan, as two of its regional partners, to use a peaceful approach and dialogue to settle the dispute over Jammu and Kashmir,” The Iranian Foreign Ministry spokesman said in a statement, in reaction to the current developments concerning the disputed Jammu and Kashmir regions.

He said that the Islamic Republic of Iran is closely following the recent decision by the Indian government regarding Jammu and Kashmir, and will take into careful consideration the explanations presented by both Indian and Pakistani officials about the recent developments.

“The Islamic Republic of Iran expects India and Pakistan, as its friends and regional partners, to take effective steps in line with the interests of the people of the region by using dialogue and adopting peaceful means,” he added.