iran << iran
In a phone call with Qatari Emir:

TEHRAN (defapress) – Some countries such as the United States are causing tensions in the Persian Gulf region which further complicates the already existing problems, said President Rouhani in a phone call with Emir of Qatar on Sunday.
News ID: 78364 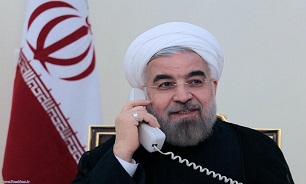 According to the news service of the Iranian Presidency, President Hassan Rouhani held a phone conversation with Emir of Qatar Sheikh Tamim bin Hamad Al Thani on Sunday afternoon, during which Rouhani congratulated the Qatari nation and government on the advent of Eid al-Adha.

“The maintenance and strengthening of regional security, especially in the Persian Gulf, Strait of Hormuz and the Sea of Oman, is very important for Iran,” Rouhani stressed during the call.

“Iran has put all its efforts into this regard and believes that maintaining security in this region guarantees the development of the region, as well as the interests of its peoples,” the Iranian president said.

He also said that the goal of some trans-regional countries’ activities in the Persian Gulf is to imply insecurity in the region, stressing that these activities make problems more complicated and perilous.

Stressing that the security and stability of the Persian Gulf can only be realized through cooperation and synergy of its littoral states in the form of joint security measures, he said, “The experience of this reality has proved it to everybody that foreign intervention has only made the problems more complicated and increased tensions.”

The Islamic Republic of Iran is willing to continue negotiating with friendly countries for more peace and stability and development in the region, said Rouhani adding “Tehran believes that the easeing of regional tensions is beneficial for everyone and we hope that the Americans realise that the path they have chosen is wrong and will have no winner. They have to change their behavior.”

During the phone call, Emir of Qatar Sheikh Tamim bin Hamad Al Thani also congratulated the Iranian nation and government on Eid al-Adha, stressing that Qatar welcomes development of relations with the Islamic Republic of Iran in all fields of mutual interest.

He also said that de-escalation of regional tensions is beneficial for the region and the world, referring to Iran’s key role in the region and saying “Doha will spare no effort for easing these tensions”.

“The security of the region must only be ensured by its littoral states, and the stances of the Qatari government in this regard is completely clear; we want to deepen our cooperation with Iran for better bilateral relations and regional security,” he added.