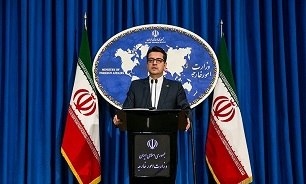 In a statement on Tuesday, Foreign Ministry Spokesman Abbas Mousavi wished Sheikh Zakzaky, the leader of Islamic Movement in Nigeria (IMN), a full recovery after the popular religious leader and his wife were granted bail by a Nigerian court to seek medical treatment in India.

“We hope that Mr. Zakzaky’s trip abroad would provide a better opportunity for the settlement of the problems of the past recent years between the IMN and the government in order to ensure the rights of Shiites, remove the restrictions, and release the prisoners,” the Iranian spokesman said.

Mousavi also voiced Tehran’s support for the current trend regarding the cleric’s case and expressed Iran’s readiness for providing assistance in this course.

His comments came after Sheikh Zakzaky and his wife flew out of Nigeria to get medical treatment in India. Held since 2015, the IMN leader was last week granted bail by a court in Kaduna state in order to seek treatment abroad.

In recent weeks, IMN members had launched a series of demonstrations in the Nigerian capital to demand the release of their couple's from prison to receive medical treatment.

Sheikh Zakzaky has been held in detention since December 2015 and was charged just in April 2018 with murder, culpable homicide, unlawful assembly, disruption of public peace and other accusations. He has pleaded not guilty.

In 2016, Nigeria’s federal high court ordered his unconditional release from jail following a trial, but the government has so far refused to set him free.

The top cleric has lost his left eyesight in a raid by the Nigerian army on his residence in the northern town of Zaria in December 2015.

During the raid, Zakzaky’s wife sustained serious wounds too and more than 300 of his followers and three of his sons were killed. Zakzaky, his wife, and a large number of the cleric’s followers have since been in custody.