TEHRAN (defapress)- Iranian President Hassan Rouhani, in a telephone conversation with his Azerbaijani counterpart Ilham Aliyev on Tuesday, described Tehran-Baku relations as brotherly, friendly, and expanding, and called for more efforts to further deepen and broaden cooperation between the two countries.
News ID: 78379 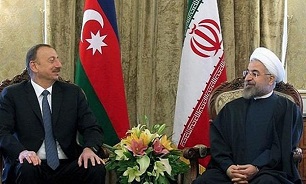 During the phone conversation with Aliyev today, President Rouhani stressed that officials of the two countries should spare no efforts to develop all-out relations and cooperation.

“Fortunately, as a result of efforts by the two countries' officials, we are witnessing positive progress in mutual cooperation,” the Iranian head of state said, after offering greetings on the advent of Eid al-Adha.

For his part, Aliyev lauded the two countries’ growing and expanding relations, which he said resulted from continued interactions between Tehran and Baku.

On Monday, Iranian First Vice-President Eshaq Jahangiri and Azerbaijani Prime Minister Novruz Mammadov, in a meeting in Turkmenistan's city of Awaza, discussed ways to further deepen bilateral relations between their respective countries, voicing the determination of Tehran and Baku to enhance ties.

At the meeting, which took place on the sidelines of the first Caspian Economic Forum underway in Turkmenistan's Awaza, Jahangiri stressed the role that the North-South Corridor can play in the development of relations among the countries of the region.