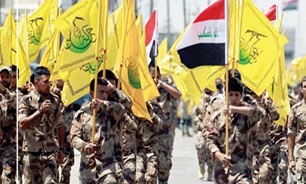 Abu Raqif noted that the recent blast in Hashd al-Sha’abi’s weapons cache in Southern Baghdad might have also been a sabotage move by the Tel Aviv regime.

One person was killed and 29 others were wounded in an explosion in an arms depot of a military base of Hashd al-Sha’abi forces in Southern Baghdad and as a result of shrapnel thrown on the nearby residential areas.

In a relevant development in August, an Iraqi lawmaker warned against the US plots to target Hashd al-Sha’abi in Western Iraq and shoeing away these forces from the region.

The Arabic-language al-Aba’a news network quoted representative of al-Fath Coalition Party in Nineveh province Mokhtar al-Mousavi as saying that the US is trying to target Hashd al-Sha’abi forces and Iraqi figures in Nineveh province in a series of new plots.

He pointed to the participation of several mercenaries in Nineveh province as saying that the plotters are doing their best to keep away Hashd al-Sha’abi from Nineveh province.