TEHRAN (defapress)- A senior member of the Iranian parliament's National Security and Foreign Policy Commission underlined that any talks with the European states should be focused on issues related to the nuclear deal and implementation of EU undertakings.
News ID: 78394 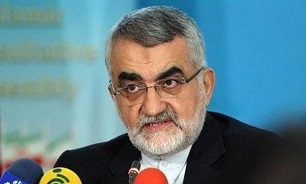 "What Europe should do is implementation of their undertakings based on the nuclear deal and we do not expect anything beyond it from them," Alaeddin Boroujerdi said on Wednesday.

"If Europe can do this, it has acted upon its responsibility towards the nuclear deal, and there should be no talks with Europe outside this framework," he added.

Araqchi intended to pass on a letter from President Hassan Rouhani to Macron.

Macron, along with German and UK leaders, has been at the forefront of European Union efforts to keep the nuclear deal from collapsing after President Donald Trump pulled the US out last year.

Later, Araqchi described the nuclear deal joint commission meeting with the Europeans as "a step forward", but meantime, reminded that it did not meet Iran's expectations.

Last month, Spokesman of the Atomic Energy Organization of Iran (AEOI) Behrouz Kamalvandi said the country's uranium enrichment level now stands at 4.5%, but underlined that the degree could increase if required by political rationale.