TEHRAN (defapress) - The US has expressed deep concern over China's redeployment of coast guard ships into the waters off the shore of Vietnam near India's oil block in the South China Sea.
News ID: 78444 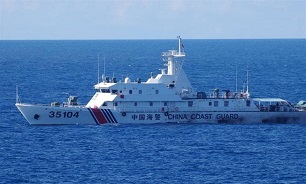 The US State Department has accused Beijing of interfering with 'Vietnam's longstanding oil and gas activities in 'Vietnam's Exclusive Economic Zone (EEZ).

"China's redeployment of a government-owned survey vessel, together with armed escorts, into waters offshore Vietnam near Vanguard Bank on 13 August, is an escalation by Beijing in its efforts to intimidate other claimants out of developing resources in the South China Sea (SCS)," the US State Department said on Thursday, Sputnik reported.

The US has also questioned "China's commitment, including in the ASEAN-China Declaration on the Conduct of Parties in the South China Sea, to the "peaceful resolution of maritime disputes".

China has rebuffed the allegations on several occasions; on 21 August, Chinese Foreign Ministry spokesperson Geng Shuang, speaking at his regular press conference, said: "The US, on the contrary, has been breaking commitments, overturning consensus and trampling on rules at every turn. Just look at its withdrawal from the Paris Agreement, the JCPOA, and more recently, the INF treaty. It never hesitates to renege on its earlier major commitments that bear on global strategic balance and stability. Does it have even a shred of credibility left?" So, as a country that is so good at flip-flops and withdrawals, that is always ready to knock over the table and walk away, the US is in no place to talk about honoring commitments."

China claims almost all of the strategic South China Sea, which is bordered by Brunei, Indonesia, Malaysia, the Philippines, Taiwan and Vietnam, brushing aside all competing claims to the resource-rich marine region.

Despite having no claims to the territories, the US is also actively engaged in the dispute, sending its military vessels to the South China Sea to fulfil what it calls "freedom of navigation" missions. These spark harsh criticism from Beijing, which describes such acts as "provocations."