TEHRAN (defapress)- Iran's Intelligence Minister Seyed Mahmoud Alavi said the shooting down of the US drone by Iran in June left grave impact on the regional Arab states' policies and filled them with such deep concerns that they immediately started rapprochement with Tehran with remorse.
News ID: 78509 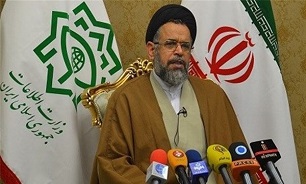 "Certain Arab states sent a message to the intelligence ministry after the US drone shotdown, expressing their willingness to renew their friendly bonds with Iran and saying that they had not stood away from us," Alavi said, addressing a forum in the Western city of Hamedan on Monday.

"In response, we told them that we don't have any problem with anyone, but that they distanced themselves from us when they started the war operations in Yemen and dreamt of annihilating that country, though they failed," he added.

He reiterated Iran's friendly ties with all nations, specially neighbors, but said, "If certain conditions arise and we feel forced to target the US bases and our neighbors are damaged in this course, we will not be pleased, but we will be forced to do so when we are left with no other option to defend our right, although this is not an option that we want to choose."