TEHRAN (defapress) – Underlining that Iran has no need for other countries to interfere in its issues, Intelligence Minister Seyed Mahmoud Alavi said Tuesday that relying on domestic expertise, Iran has managed to develop a deterrence power.
News ID: 78518 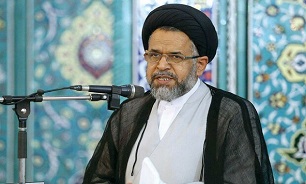 There are some countries which have more facilities and military equipment than Iran but they are not independent from the US and do not have their own say in matters, he said, adding that they cannot be compared to Iran regarding independence and deterrence power.

“Most of the European countries are not independent and need America’s opinion for making decisions,” the minister said.

“Everybody knows that the Islamic Republic waits for no one to decide about its national interests and objectives,” Alavi said.

“Today, Iran has a precise roadmap and stands in a position that it can impose its will on the US and the Zionist regime,” he added.