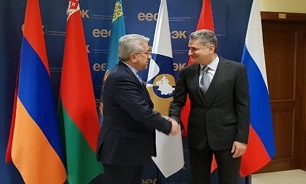 At the meeting, Ardakanian referred to the completion of the legal process for joining the EAEU, saying that the interim agreement will help boost non-oil trades between Iran and the regional union.

“The deal will officially take effect on October 26 and will include 864 data-x-items as preferential commodities,” he said.

“503 data-x-items in the list are Iranian goods, 70 of which will enjoy zero tariffs for exports.”

Ardakanian also invited the EAEU chief to visit Tehran in continuation of bilateral talks between Iran and the union, saying the trip would be a unique opportunity for promoting the cooperation and attracting investors and businesspersons from different sectors.

Ardakanian, who also heads the Iran-Russia joint economic commission, also held a meeting with his Russian counterpart Sergey Lavrov in Moscow on Monday.