TEHRAN (defapress)- President Nicolas Maduro is deploying missile defenses along Venezuela’s border to ward off a potential attack launched under false pretenses, he announced after declaring an “orange alert” over the Colombian threat.
News ID: 78602 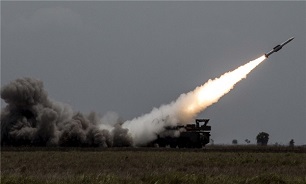 Colombian President Ivan Duque has not only put his country “into a war that is raging, but now aims for a false positive to attack Venezuela”, Maduro said in an address broadcast on state TV on Wednesday,

Maduro warned that Duque could use a phony incident to “put together a cheap political show at the cost of an armed conflict” and hoodwink the international community into backing him.

Maduro ordered the deployment of Venezuela’s missile defense system and commanded the military to patrol the Colombian border for two weeks starting on September 10, without specifying any details. Earlier he declared an “orange alert against the threat of aggression of Colombia against Venezuela” on Tuesday, two days after Communications Minister Jorge Rodriguez presented satellite photos charging Colombia with harboring terrorist training camps.

Last week, the US opened a “Venezuela Affairs Unit” in its Colombian embassy, signaling that the effort to depose Maduro with the help of Venezuela’s neighbors is not winding down any time soon despite the repeated failure of US-backed opposition leader Juan Guaido’s efforts to seize power.

Meanwhile, the US Air Force has completed its first deployment to Guyana in over a decade, having sent 600 service members on a four-month “humanitarian outreach” mission with an eye toward forging a lasting alliance with the country’s military.

The US has also stepped up its “humanitarian assistance” to Venezuelans living everywhere in the region except Venezuela, supplying $120 million through USAID as Washington continues to exert “maximum pressure” through choking Caracas with sanctions. The latest round, announced last month, included the seizure of all Venezuelan government assets in the US and threats to Venezuela’s allies that they will be hit with secondary sanctions if they continue to do business with Caracas, while Presiden Donald Trump floated the idea of a naval blockade.