TEHRAN (defapress)- The Damascus Army troops are preparing for cleansing terrorists from Western Aleppo with the aim of restoring security to the center of the city as Tahrir al-Sham al-Hay’at (the Levant Liberation Board or the Al-Nusra Front) continues occupation of Northern Syria despite the pledges made by Turkey.
News ID: 78618 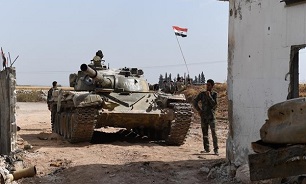 The Arabic-language al-Watan newspaper reported that the Syrian Army has been dispatching troops and massive military equipment to Western and Southern Aleppo in preparation for military operations in Jamiat al-Zahra and Al-Rashedeen regions in Western Aleppo.

The newspaper pointed to the presence of 1,500 Syrian Army troops and their allies in Western Aleppo, and said that the terrorist groups have not retreated from the demilitarized zone despite lapse of six days since declaration of ceasefire by the Syrian Army there.

The military experts, meantime, announced that by driving back the terrorist groups from the Southern and Western battlefronts of Aleppo along Aleppo-Hama Highway, the Syrian Army has not only maintained the security of the city against mortar and rocket attacks by terrorists on residential areas, but it will also pave the way for reopening of this region’s international airport.

The Syrian Army troops have also foiled an attempt by the National Liberation Front (NFL) terrorists to penetrate into military points in Southern Idlib.

In a relevant development on Wednesday, the Arabic-language media outlets reported that the Syrian Army was fully preparing itself for resuming large-scale military operation in the demilitarized zone as terrorist groups continue to violate the ceasefire.

The Arabic-language al-Watan newspaper quoted local sources in the city of Ma’aret al-Numan in Southern Idlib as saying that Tahrir al-Sham has reinforced its military positions in the city, specially the city’s Southern and Southeastern sections and in al-Tamane’ah with the aim of preventing the Syrian Army advance.

The newspaper noted that the terrorist groups have not retreated from Aleppo-Damascus and Aleppo-Lattakia highways, and said that the Syrian Army is at its highest level of preparedness to resume military operations after the ceasefire comes to an end in the demilitarized zone.

Meantime, the Syrian Army’s battlefield sources pointed to the dispatch of massive military convoys comprising tanks and military equipment to Tal-e al-Zawiqat in Northeastern Lattakia near the strategic Kabaneh region to carry out military operations against the Turkistani Party and Uigurs.

Meantime, the Syrian Air Defense in the Lattakia city downed two drones of the terrorists near Humeimem Air Base.

In a relevant development on Monday, the Arabic-language media outlets reported that Ringleader of Tahrir al-Sham Abu Mohammed al-Jolani had collaborated with Washington in the recent air raids on affiliated terrorist groups in Idlib with the aim of defeating Turkey's efforts to dissolve Tahrir al-Sham in Northern Syria.

Al-Watan newspaper quoted sources affiliated to Tahrir al-Sham as saying that the recent US airstrikes against the terrorists' command centers between the towns of Kafraya and Ma'arat Misrin in Northern Idlib were carried out through the intel provided by al-Jolani to the US.

They added that he has given the Americans a list of the bases and weapons and equipment caches of Tahrir al-Sham and other affiliated groups, including Ansar al-Touhid and Horras al-Din which had under Turkey's pressure declared their defection from Tahrir al-Sham.

The sources said that Washington's military intervention in Idlib after the ceasefire was declared and after the Russian-Turkish meeting in Moscow is aimed at making ineffective Ankara's efforts under the Sochi agreement.

Al-Watan newspaper quoted sources close to the National Liberation Front and Tahrir al-Sham as saying that Turkish President Recep Tayyip Erdogan has in a recent meeting with his Russian counterpart Vladimir Putin vowed to dissolve Tahrir al-Sham and other affiliated terrorist groups, including Horras al-Din and Ansar al-Touhid, within 8 days.

They said that the ceasefire declared by the Syrian army on Saturday was also in line with the agreement, adding that one of the conditions demanded by Syria was its army's control over a vast area of Hama-Idlib international road.

The sources underlined possible opposition of Tahrir al-Sham to Turkey's agreement with Russia, saying that based on the agreement, in case of Ankara's inability to implement its promises, the Russian and Syrian armies will resume their military operations towards the towns of Ma'arat al-No'eman and Saraqib on Hama-Idlib international road.

The Syrian Army on Saturday agreed to ceasefire in the demilitarized zone of Idlib after making massive advances in the Southern part of the province.

The Arabic-language SANA news agency quoted a battlefield source as saying that the Syrian Army has declared implementation of truce in the demilitarized zone while reiterating that it will respond to any violation of ceasefire by the terrorists.

After taking full control of al-Tamane’ah strategic town, the Syrian Army continued its advances in Southern Idlib and regained control of the towns of al-Khovein al-Kabir, al-Sakiat, Eastern and Western Farms of al-Tamane’ah, Tal Turki, Tal Sayyed Jafar and strategic Sayyed Ali Hilltop just one kilometer to the North of al-Tamane’ah that overlooks al-Azizieh-Tahtaya Road.

The battlefield sources also reported that the Syrian Army troops killed at least 37 Tahrir al-Sham al-Hay’at, Horas al-Din and Turkistani terrorists and destroyed several of their military vehicles and equipment.