TEHRAN (defapress)- A senior Iraqi legislator revealed that the US has informed the country's government that Israeli drones have participated in a number of offensives against the positions of Hashd al-Shaabi (popular forces).
News ID: 78663 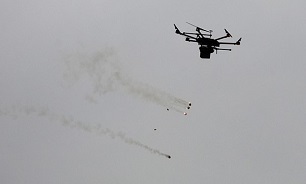 Abdolkhaliq al-Azawi, a member of the Iraqi parliament's Security and Defense Committee, was quoted by the Arabic-language al-Nahrain news website as saying that the Iraqi government's fact-finding committee has ended its investigations into the cause of the explosions in Hashd al-Shaabi positions and arms caches.

"It came to be known that 12 attacks were launched, using drones," he added.

According to al-Azawi, the US which is responsible to protect Iraq's airspace has informed the Iraqi government that the attacks have been launched by the Israeli drones.

Late in August, Iraq’s Hashd al-Shaabi forces in a statement announced that Israeli drones backed by the US aircraft pounded their positions near the border with Syria.

The Hashd al-Shaabi in a statement reported that two Israeli drones struck its military positions in Akashat-Alqaem Road in al-Anbar province 15 kilometers from the border with Syria.

The statement noted that the attack had taken place with the aerial support of the US and monitoring of a huge surveillance balloon near the site of the attack, and said that the attack took place with the start of the Phase 4 of Eradeh al-Nasr (the Will of Victory) military operation jointly conducted by the Iraqi Army, Police Force and Hashd al-Shaabi against the ISIL remnants in the Western part of the country.

It noted that a Hashd al-Sha’abi member was killed and another was wounded in the Israeli drone attacks.