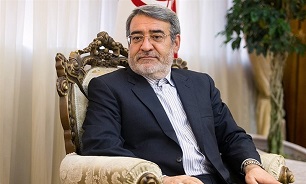 Heading a high-ranking delegation, Rahmani Fazli left Tehran for Bishkek on Thursday to meet with senior officials of the Central Asian country, including his counterpart, Kashkar Junushaliev.

During his two-day visit, Rahmani Fazli will finalize an agreement to boost security and police cooperation between the two countries.

Meetings with other Kyrgyz officials and a cordial meeting with Iranian expatriates living in Kyrgyzstan are also on Rahmani Fazli’s agenda in Bishkek.

Back in May, high-ranking diplomats from Iran and Kyrgyzstan held the fourth round of political consultations between the two countries in Tehran.

The negotiations were co-chaired by Iran’s Deputy Foreign Minister for Political Affairs Abbas Araqchi and his Kyrgyz counterpart, Nuran Niazaliyev.

The two sides discussed a range of issues, including mutual, regional, and international cooperation, and reached an agreement on the agenda of meetings between senior officials of Iran and Kyrgyzstan during the current Iranian year (started March 21).