TEHRAN (defapress) – Iran’s Foreign Ministry Spokesman Seyed Abbas Mousavi rejected anti-Iran allegations raised in the final declaration of a meeting of the Arab Quartet Committee in the Egyptian capital, Cairo, saying insistence on useless past mistakes will only increase problems in the region.
News ID: 78686 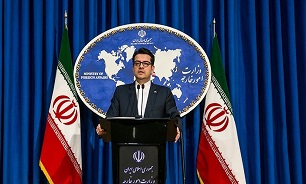 In a statement on Thursday, Mousavi dismissed the "worn-out" and "rejected" accusations contained in the final declaration of the 12th meeting of the Arab Quartet Committee in Cairo against the Islamic Republic of Iran.

He said futile attempts by some Arab countries in making baseless allegations amount to insistence on pursuing the same past political mistakes.

“The rehash of groundless accusations against (Iran’s) eternal ownership of its three islands in the Persian Gulf and the blame game by some Arab countries whose regional policies have failed are, in the Islamic Republic of Iran’s view, the reason behind their failure to understand the realities of the region and the world,” the spokesman added.

“It is regrettable that some (countries), instead of relying on the power of Persian Gulf states, make divergent, unfounded and undocumented allegations about the security of the region and welcome foreigners with their desperation,” Mousavi said, according to the Foreign Ministry’s website.