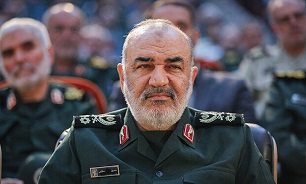 “Our soldiers, Basijis and Guards are ready for enemies with open eyes in borders and we are not worried about big and small enemies,” said the commander on Thursday on a local ceremony in North Khorasan province.

“We have crossed such worries and the enemy is well aware of this. Today, we have become so powerful that they are forced to connect any incident with us through making false claims,” said Salami.

The remarks came as US and Saudi Arabia have accused Iran of being behind Saturday’s Yemeni attacks at two oil facilities in Saudi Arabia without providing any credible evidence.

In a note of warning to Washington, Tehran strongly dismissed the baseless accusations also warning that any aggression against the Islamic Republic will be promptly responded and the response may include broader areas than the source of attacks.