TEHRAN (defapress) – Gen. Joseph Dunford, the chairman of the US Joint Chiefs of Staff, admitted that NATO’s military advantage over Russia had eroded in past years.
News ID: 78744 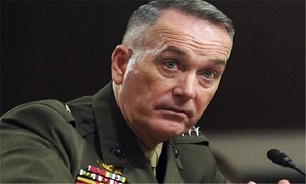 "Russia is a competitor and the NATO advantage over a resurgent Russia has eroded," General Joseph Dunford was quoted by the Newsweek magazine as saying following the recent NATO military committee meeting in Slovenia, Tass reported.

According to the US official, NATO defense chiefs realize that the balance of forces has shifted and the alliance’s new military strategy, approved in May, takes this fact into account.

Dunford also said that Russia and China closely studied US actions and military strategy since the end of the Cold War and attempted to develop technologies and strategies that would exploit weak spots of the United States.