TEHRAN (defapress) – A Taliban truck bomb killed at least 20 people and wounded 95 others when it exploded near a hospital in southern Afghanistan, an official said.
News ID: 78746 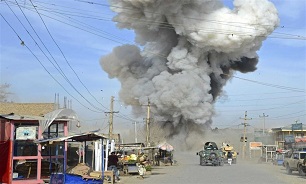 The Taliban, who have been carrying out nearly daily attacks since peace talks with the United States collapsed earlier this month, said the target was a nearby government intelligence department building in Qalat, the capital of Zabul province.

A senior defense ministry official in Kabul said the militants wanted to target a training base for the country's powerful security agency National Directorate of Security, but parked the explosives-laden vehicle outside a hospital gate nearby, Reuters reported.

Haji Atta Jan Haqbayan, a member of the provincial council in Qalat, said 20 bodies and 95 wounded had been evacuated from the blast site.

"The number of casualties may rise as rescue teams and people are still searching the bodies under the rubble," he said.

Several women, children, health workers and patients in the hospital were critically injured in the blast.