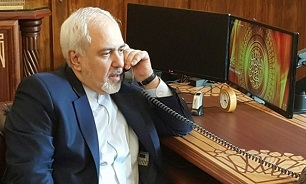 During the phone talk on Thursday night, Zarif and al-Sabah conferred on the ways of deterring tensions, keeping the region from more peril as well as ensuring stability.

The phone call came hours after Washington said it was seeking to create an anti-Iran coalition. US Secretary of State Mike Pompeo had described the initiative as a "coalition aimed at achieving peace”.

Washington's so-called "coalition" announcement came in response to an attack led by Yemeni Armed Forces against Saudi Arabia's oil facilities over the weekend.

Washington and Riyadh rushed to blame Tehran for the air raids, prompting an outright rejection from Iranian officials.

Showing reaction to war rhetoric of the US, Iranian Deputy Army Commander for Coordination Rear Admiral Habibollah Sayyari stressed on Thursday that his country's power has deterred any enemy attack.

"Enemy is still present but doesn’t dare to face a powerful country; our Armed Forces enjoy full readiness. The enemy knows that the Iranian nation backs the Armed Forces and that people and Leader are united," Rear Admiral Sayyari said, addressing a local ceremony in Markazi province in Central Iran.

Also on Thursday, Commander of the Islamic Revolution Guards Corps (IRGC) Major General Hossein Salami underlined that Iran has grown so much powerful that enemies resort to lies and allegations to blame the country for any incident in the world.

On Wednesday, Secretary of Iran's Supreme National Security Council (SNSC) Ali Shamkhani dismissed the US allegations of Tehran's involvement in the Saturday attacks on Saudi oil installations, warning of a crushing and powerful response to any aggression.

"The crisis in Yemen that Saudi Arabia's continued military aggression has prolonged for over 50 months has no military solution and can end only within the framework of Yemeni-Yemeni talks and without interference of third parties," Shamkhani said.

He described the Yemeni people's defense against foreign aggression and cruel massacre of the country's citizens as their legitimate and legal right and a natural reaction to aggressors' cruelties.

Shamkhani noted that the Yemeni army designs and builds its own weapons, and said blaming other countries for the Saturday attacks is just escaping ahead not to account for wasting resources to purchase advanced but ineffective military equipment from the Western states.

He underlined that Iran's strategic policy is decreasing tension, avoiding any clashes and resolving the regional crises through talks.

"Meantime, Iran monitors, with full preparedness, any intention and move for the purpose of aggression against the country or the interests of the Islamic Republic and will give a decisive and all-out response to possible mischiefs in the harshest way which can surprise the aggressors," Shamkhani said.

Also, the Yemeni Armed Forces spokesman's remarks and images taken by the country's drones before and after the Saturday attacks exonerated Iran of allegations by the US and Saudi officials.

Spokesman of Yemen's Armed Forces Yahya Saree in a press conference displayed images taken by the Yemeni drones before and after the Saturday attacks against the Saudi Aramco oil facilities.

During the press conference in Sana'a on Wednesday, General Saree highlighted that aerial photographs, taken by Yemeni reconnaissance drones in the wake and aftermath of the operation, show the extent of damage caused on the two major oil facilities in Saudi Arabia, stating that it was launched following a careful intelligence collection process.

“The destruction of the targeted facilities is far greater than what has been announced. Americans sought to publish fabricated pictures of the operation aftermaths as part of attempts to downplay it. The blaze lasted for several hours and authorities in the state of aggression (Saudi Arabia) could not contain it,” the high-ranking Yemeni military official pointed out.

Saree went on to say that various kinds of combat drones were used in the Second Deterrent Balance Operation, noting that they were launched from three different locations according to their flight endurance and designated targets.

He underlined that the third generation of domestically-designed and -manufactured Qasef (Striker) combat drones, long-endurance Sammad-3 (Invincible-3) drones – which have an operational range of 1,500 kilometers to 1,700 kilometers and newly-developed drones equipped with jet engines.

Saree said each of the new drones can carry four precision-guided bombs with fissionable heads every time, and can monitor and hit their targets from several angles.

“Other aircraft were also used so the main combat drones could hide in their shadow without being detected, and signal jamming devices effectively disabled the enemy’s air missile defense systems,” he said.

General Saree lauded the highly disruptive drone attacks on Saudi Aramco petroleum and gas processing plants at Abqaiq and Khurais in the kingdom's Eastern Province as an outstanding example of the military prowess of Yemeni army troops and allied fighters from Popular Committees.

“Our forces have reached a high level of efficiency and ability. They can manufacture various types of unmanned aerial vehicles in record time. The Second Deterrent Balance Operation, which targeted Saudi oil installations, is a perfect example of the capabilities of our forces in terms of planning and implementation,” he said.

“We assure the world that the free and steadfast Yemeni nation will not hesitate to respond to the (Saudi-led) coalition of aggression, and will use its legitimate right to target all targets deep inside the countries involved,” General Saree said.

The spokesman for Yemeni Armed Forces then cautioned the United Arab Emirates against its atrocious military campaign in Yemen, emphasizing that Emirati officials will rue the day if they continue their aggression.

“Simply one operation can inflict heavy losses upon them and strike them with a pang of regret. We hereby announce that dozens of targets in the UAE, namely in Abu Dhabi and Dubai, are within our range. We urge the aggressors to stay away from Yemen if security and safety of their infrastructure and glass towers matter to them,” Saree concluded.