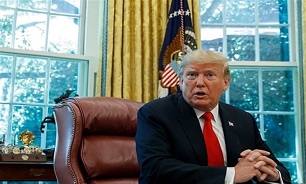 Speaking in the Oval Office during a meeting with Australian Prime Minister Scott Morrison, the US president said, "We have just sanctioned the Iranian national bank."

He said, "I think the sanctions work. The military would work. That's a very severe form of winning."

US Treasury Secretary Steven Mnuchin told reporters the bank was Tehran's last source of funds, saying, "We have now cut off all funds to Iran".

Iran has strongly denied any involvement in the attacks on the Saudi Aramco facilities, which shook global oil markets.

Tehran has warned that any strike on it by the US or the kingdom would lead to "an all-out war".