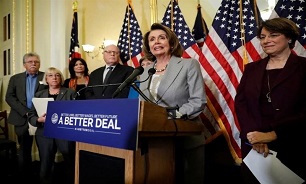 Pelosi called the response "the latest outrageous attempt by the Trump Administration to circumvent the bipartisan, bicameral will of Congress," adding in a statement Saturday, "These unacceptable actions are cause for alarm."

The speaker's ire follows an announcement from the Pentagon Friday that it would send additional troops and enhanced air and missile defense systems to the two countries in response to the September 14 attacks on Saudi oil facilities, which the US has blamed on Tehran. Iran has denied any involvement.

"Americans are weary of war, and have no interest in entering another Middle East conflict, particularly on behalf of Saudi Arabia," Pelosi argued, CNN reported.

"They will not stand by while the President undermines our security and jeopardizes the lives of our brave service members."

Some conservatives also slammed the deployment of American troops to the region, citing the need to limit foreign military intervention.

"America needs to end the neoconservative consensus," he added. More wars in more places does not make America more secure. Saudi Arabia is a sovereign nation perfectly capable of defending their own sovereignty."

This isn't Trump's first clash with Congress over funneling military resources to the pair of countries.

Pelosi noted that both chambers voted to block arms sales to Saudi Arabia and the UAE earlier this summer. In July, Trump vetoed three joint resolutions prohibiting arms sales to the two countries.

The Trump administration also declared an emergency in May to bypass Congress and expedite billions of dollars in arms sales to various countries -- including Saudi Arabia and the United Arab Emirates -- citing the need to deter what it called "the malign influence" of Iran throughout the Middle East.