TEHRAN (defapress) – Iranian President Hassan Rouhani rang the bell at a girls’ high school in downtown Tehran on Sunday in a symbolic gesture to mark the first day of the school year in Iran.
News ID: 78789 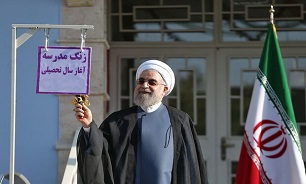 Iranian students start the school year on September 23, which marks the first day of autumn on the Iranian calendar, after three-month summer vacation.

The back-to-school ceremony is officially inaugurated by the president each year, as he rings the bells in a symbolic gesture at a chosen school. This year, more than 100,000 schools and educational centers opened across Iran on Monday, offering curriculum in a variety of subjects to some 14.4 million students.

Speaking on Monday at Hazrat Khadijah (SA) Girls’ School in Tehran, Rouhani said that “Education budget has increased 3-fold since the beginning of the previous presidential term, and teachers’ salary has increased 4-fold.”

Posing the Mehr Question, which is annually raised for a nationwide competition between students, Rouhani asked “What can we do to have a more vibrant, pleasant, and safer atmosphere at schools?”