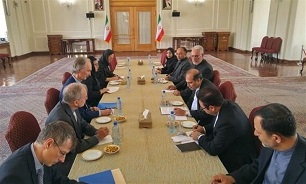 Khaji, who is also Iran’s senior negotiator in Syrian and Yemeni affairs, met Pedersen at the Embassy of the Islamic Republic of Iran in Beirut on Monday evening.

In the gathering, the two sides discussed the latest developments in Syria.

Pedersen, who has travelled to Beirut after meetings with Syrian officials in Damascus, provided a description of the negotiations and agreements with the Syrian authorities in the meeting.

The two sides also expressed satisfaction with the progress made in the formation of Syria’s Constitutional Committee, and emphasized the necessity for the ultimate resolution of the Syria crisis, according to the Foreign Ministry’s website.

Khaji is visiting Damascus on Tuesday for talks with Syrian officials.

In a meeting with Pedersen earlier this month, Iranian Foreign Minister Mohammad Javad Zarif reaffirmed Tehran’s determination to settle the Syria crisis politically, expressed support for any positive interaction between Damascus and the United Nations, and stressed that Tehran always encourages contacts between Syria and the UN.

The Syrian army has managed to liberate many of the areas occupied by terrorists over the past year and has begun the reconstruction process.

Last month, the Syrian president’s political and media adviser, Bouthaina Shaaban, hailed the bilateral relations between Tehran and Damascus as “strategic” and said the ties can never be affected by enemies of the Islamic Republic.