Turkey Will Continue to Buy Oil, Natural Gas from Iran Despite US Sanctions

TEHRAN (defapress)- President Recep Tayyip Erdogan stated that it's “impossible” for Ankara to stop purchasing oil and natural gas from Tehran, suggesting that Turkey will disregard a raft of US sanctions now imposed on Iran’s energy sector.
News ID: 78824 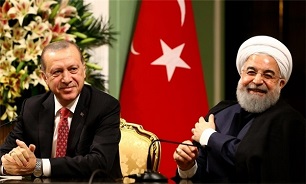 Erdogan told reporters aboard his return flight from the UN General Assembly meeting in New York that Ankara would not be deterred by American sanctions on Iran’s oil and gas trades, and said Turkey has no interest in cutting ties with the Islamic Republic, NTV reported.

The US, as part of President Donald Trump’s so-called “maximum pressure” campaign, has been seeking to cripple Iran’s economy through what Washington refers to as “toughest ever” sanctions.

The campaign, which began in May 2018 after Trump abandoned the 2015 Iran nuclear deal, has witnessed several rounds of sanctions that specifically targeted Tehran’s oil exports and sought, unsuccessfully, to bring them to zero.

Turkey is heavily reliant on energy and petrochemicals imported from Iran.

The US, along with its ally Saudi Arabia, recently blamed Iran for attacks on a pair of Saudi oil facilities, despite Yemen’s Houthi Ansarullah claiming responsibility for the incident, and Tehran denying any involvement. Erdogan has so far refrained from joining in on the finger-pointing, refusing to jump on the Washington-Riyadh ‘blame Iran’ bandwagon.