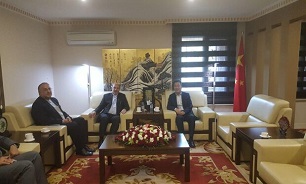 During the meeting, the Iranian Consul General in Iraqi Erbil, Nasrollah Roshnoudi, felicitated his counterpart on China’s national day, and thanked Beijing for its support to Tehran's positions in international communities.

He also noted the deep-rooted trade and commercial ties between the two sides, expressing hope for the further development of cooperation between Tehran and Beijing.

China's Consul General in Erbil Ni Ruchi, for his part, discussed the volume of trade transactions between the two countries, and noted China’s position as Iran’s first trade partner.

He also highlighted the resolve of Chinese authorities to further develop relations with Iran.