Diplomat Raps US for Barring Zarif from NY Hospital Visit

TEHRAN (defapress) – A top Iranian diplomat lashed out at the US for the “inhumane” decision to bar Iranian Foreign Minister Mohammad Javad Zarif from visiting the country’s UN envoy who has been hospitalized in New York.
News ID: 78839 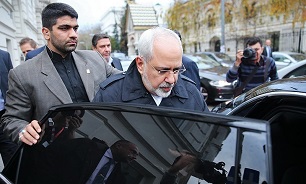 The US State Department said it would allow the hospital travel request only if Iran released one of the US citizens claimed to be "wrongfully detained" in Iran, AP reported.

Iran’s foreign minister is in New York for the 74th annual session of the UN General Assembly.

In July, the United States imposed tight travel restrictions on Zarif before a visit that month to the United Nations, as well as on Iranian diplomats and their families living in New York, which Zarif described as “basically inhuman.”

Unless they receive prior approval from Washington, they are only allowed to travel within a small area of Manhattan, Queens and to and from John F. Kennedy airport.

Iran’s UN mission spokesman Alireza Miryousefi said Takht Ravanchi was being treated for cancer in a hospital not far away in Manhattan’s Upper East Side neighborhood.