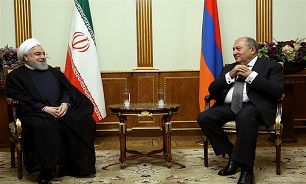 Rouhani held a meeting with his Armenia counterpart Armen Sarkissian on Monday evening shortly after arriving in Yerevan for a summit of the Eurasian Economic Union (EAEU).

In the meeting, the Iranian president said Iran was prepared to share its experience in technical and engineering fields, dam construction and energy industry with Armenia.

Highlighting the great potential of the two countries’ private sectors and the opportunities for joint investment, Rouhani said Tehran and Yerevan can promote cooperation in various areas, such as the energy industry, transit of goods and transportation, tourism, and industrial projects.

Expansion of relations with neighbors, including Armenia, is a pillar of the Islamic Republic’s foreign policy, Rouhani underlined.

He also said that Iran’s membership in the EAEU provides a perfect opportunity for the enhancement of bilateral and multilateral trade ties across the region.

For his part, Sarkissian said Armenia seeks to promote ties with Iran in different economic and industrial fields.

He also welcomed Tehran’s involvement in the Eurasian Economic Union and promotion of the activities of free trade zones.

In comments before leaving Tehran to Yerevan on Monday, Rouhani said Iran will officially join the Eurasian Economic Union on October 27, marking the Islamic Republic’s first membership in a regional economic union.

He noted that according to Iran’s agreement with the EAEU, 502 Iranian goods will be subject to preferential tariff rates for the exports to the EAEU members.

Rouhani described Iran’s membership in the EAEU as an opportunity to enhance the economic power at the regional level before a competition on a global scale.

Iran’s interaction with the EAEU members, with a total population of 180 million, could be of great significance given the US attempts to mount the pressure of cruel sanctions on people of Iran, Rouhani said.

The president also stated that Iranian business people and economic sectors could seize the opportunity to enhance trade with the five members of the EAEU (Russia, Belarus, Kazakhstan, Armenia and Kyrgyzstan) and also have access to the markets of other regions subsequently.