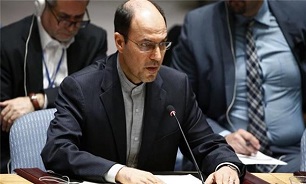 “The Saudi child-killer regime is trying to distract attention from its support for terrorist groups, bombing of Yemen and other blatant violations of international law,” Dehqani said, addressing the UN Security Council meeting on the political situation in Syria and in response to Saudi representative’s remarks made at the meeting.

In relevant remarks in September, Iranian President Hassan Rouhani underlined that the Yemenis' offensives on Saudi oil installations were a warning to the enemies to end war and conflicts in the region.

"Enemies of the region should take lesson from this warning and should be after extinguishing the fire of war in the region to let the people live in freedom and welfare," President Rouhani said, addressing a cabinet meeting in Tehran.

He referred to the recent wars launched by the US and its allies in the region, including Iraq, Afghanistan, Syria and the Persian Gulf region, calling on them to bring peace at least one time.

"Why do you always send gunpowder to the regional nations and avoid helping them and then raise allegations against other countries while no one believes these allegations," Rouhani said.

He dismissed the US allegations about Iran's involvement in Yemenis' attacks on the Saudi oil installations, and said, "Iran wants friendly relations with its Southern neighbors."

President Rouhani defended the Yemeni people's right to respond to aggressions against their country, and said the Yemenis have not targeted schools, hospitals and markets (like what the Saudi-led coalition did in Yemen) and have attacked an industrial center to warn their enemies.