TEHRAN (defapress) – Iranian Foreign Minister Zarif said a four-point document brokered by French President Macron on reducing tensions between Iran and US does not reflect the stances of the Islamic Republic correctly.
News ID: 78882 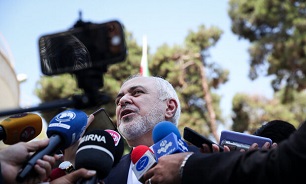 “The plan is written in [Macron’s] language and does not include our views,” Zarif told reporters on the sidelines of a cabinet meeting on Wednesday.

“We have already clarified that the Islamic Republic of Iran does not seek nuclear weapons. Our HOPE (Hormuz Peace Endeavor) initiative perfectly shows that we have sought security in the Persian Gulf and shipping lines since our first letter to the UN Secretary General in 1985, but it was others who were undermining our efforts. Our stances are crystal clear, but the 4-point plan does not reflect them correctly,” Zarif added.

The four-point document brokered by Emmanuel Macron in New York includes: "Iran will never acquire a nuclear weapon" and will “fully comply with its nuclear obligations and commitments and will accept a negotiation on a long-term framework for its nuclear activities.” It would also “refrain from any aggression and will seek genuine peace and respect in the region through negotiations”.

Also as part of the plan, the United States would agree to “lift all the sanctions re-imposed since 2017” and “Iran will have full ability to export its oil and freely use its revenues,” according to the text.

Zarif stressed that negotiations will continue until these topics are reflected correctly.

“Our efforts will continue through various channels; at the same time, we are firm on our position that if Europe fails to live up to its commitments to the nuclear deal, we will carry on with our own measures,” he added.

Asked about the possibility of Macron’s visit to Iran, Zarif said “there is nothing on agenda for now, but the invitation always stands.”

Zarif also noted that US President Donald Trump's UN address was completely contrary to what the European sides kept saying about his readiness to ease sanctions on Iran.

Elsewhere, Zarif touched upon regional issues, saying “we have always said that we seek understanding with our neighbors. We are not seeking tension. If the Saudi government arrives at the conclusion that it can’t achieve security by buying weapons and relinquishing its sovereignty to others in the process, it will be surely welcomed with open arms by Iran.”