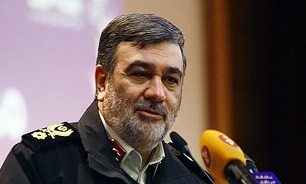 The Islamic Republic of Iran is among five countries owning top defense power, General Ashtari said, addressing a meeting on the occasion of Police Week in Iran on Thursday.

He pointed to the self-sacrifice of police forces for providing order and security in all parts of the country, and added, “Every year, police forces render high-quality services to all walks of life which is unprecedented.”

Security is one of the highest blessings, General Ashtari said, adding, “Relying upon the assistance of the God Almighty and under the auspices of wise guidelines of Supreme Leader of Islamic Revolution Ayatollah Seyed Ali Khamenei as well as unsparing endeavors of the Armed Forces, ranging from Army, IRGC to Police forces, we have stable security in the country.”

The Iranian police, border guards and the IRGC are actively engaged in security operations against anti-Iran terrorist groups.

Commander of the Islamic Revolution Guards Corps Ground Force Brigadier General Mohammad Pakpour announced late last month that the IRGC forces had engaged in over 50 clashes with the terrorists at the Iranian borders and killed tens of militants since late March.

"Over 50 cases of attack have happened in the past 6 months which have led to clashes and considerable tolls have been inflicted on the terrorists' operational teams at the Northwestern and Southeastern borders of Iran," General Pakpour told FNA.

He also added that several Takfiri and terrorist teams in the Western borders of Iran have been dismantled completely by the IRGC Ground Forces and tens of terrorists have been killed in the past three years.

General Pakpour underlined that security and tranquility prevails at the Iranian borders despite all moves made by the terrorist groups due to the intelligence superiority and preparedness of the IRGC Ground Force's units.