TEHRAN (defapress)- Commander of the Iranian Army's Ground Force Brigadier General Kioumars Heidari underlined that his country has developed the most state-of-the-art weapons and equipment to defend itself against any possible aggression.
News ID: 78891 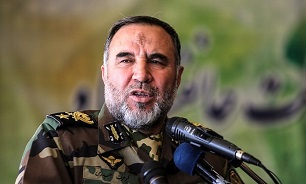 General Heidari made the remarks on the sidelines of a ceremony to unveil the Army's new achievements on Thursday.

Fighting is a science and is developing like all other phenomena, he said, adding, “For this purpose, we need special tools and technologies to fight and defend our land and territory.”

“Today, we are in a position that we have to defend the country against external threats and in this way, we have to indigenize production of defensive equipment, otherwise, we may sustain irreparable damages,” General Heidari emphasized.

He went on to say that the Iranian Army Ground Force has been equipped with different advanced types of stealth, operational and traceable drones.

He emphasized that all drone requirements of Iran’s Army Ground Force are designed and manufactured by domestic experts.

Iran has made great achievements in developing drones and missiles after the Islamic Revolution.

"Three Mohaher 6 combat drones joined the drone fleet of the Ground Force and we will witness a new arrangement in the drone operations of this Force," Commander of Vali-e Asr drone group of the Army Ground Force Brigadier General Shahram Hassannejad said.

He added that Mohajer is capable of destroying targets powerfully and with a high precision power, adding that it can also detect and monitor the regions under the control of the Ground Force.

General Hassanzadeh also said that high range, considerable flight durability up to 24 hours and capability to carry rockets with high-precision power for day and night missions are among other features of the drone.