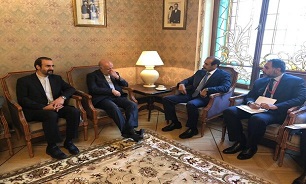 The Iranian oil minister is in Russia to attend the 21st ministerial meeting of the Gas Exporting Countries Forum (which is also known Gas OPEC) held in the Metropol Hotel in the Russian capital of Moscow.

On the sidelines of the Gas OPEC meeting, Zanganeh held a bilateral meeting with Suren Papikyan, Armenia’s Minister of Territorial Administration and Infrastructures on Thursday.

The Iranian and Armenian ministers also discussed the latest bilateral plans between the two countries.

Zanganeh also had a meeting with Qatari minister of state for energy affairs Saad al-Kaabi, during which the two ministers exchanged views on the latest developments in the field of energy and safe gas exports and the prospects for a global market.