TEHRAN (defapress) – Iranian Minister of Petroleum Bijan Zangeneh has called on the Gas Exporting Countries Forum (GECF) member states to resist against pressure and imposition of opinions of some world powers, saying energy security should be in line with the interests of all countries.
News ID: 78903 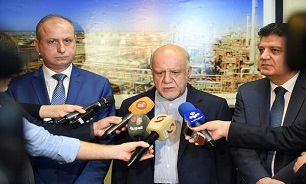 "The forum is playing its important role in the global arenas regarding the substantive characteristics of the gas market," he said following the 21st Ministerial Meeting of the Gas Exporting Countries Forum (GECF) in Moscow on Thursday.

He added, "At the twenty-first GECF Ministerial Meeting, issues related to the normal course of this international body were reviewed and reports were provided on market status, supply and demand."

The Iranian petroleum minister also referred to the extension of the term of Secretary General of the GECF HE Yury Sentyurin, for a period of two years.

Zangeneh then stressed that there was a need to expand cooperation among the members of this international body in order to meet the challenges facing the gas industry in the world.

During the meeting, he also said that the main task of the GECF member states was to ensure energy balance and sustainable gas supply in the path to development, adding that attention to environmental issues and facing challenges in the field of gas was also essential.

The official said that protecting the national interests of the member states and resistance against pressure and imposition of the opinions of some world powers was an inevitable necessity, adding, “Ensuring energy security and free flow of oil and energy should be in line with the interests of all countries.”

“The initial idea of ​​establishing an institution like OPEC for both natural gas producers and exporters was first presented at a meeting in Tehran for the first time in 2001,” he said.

It is now 18 years since then, and we have seen a lot of progress in this international body, he added.

The Iranian Minister of Petroleum also stressed the need to expand cooperation among GECF members to meet the challenges facing the gas industry in the world.

Listing the destructive actions of the US and some of its regional allies, Zangeneh said the ineffective policy of sanctions and creation of tensions has devastating consequences for the global economy.

Oil and Energy ministers of GECF meet once a year and the meeting is held in one of the member states. The 20th GECF ministerial meeting was held back in November 2018 in Port of Spain, Trinidad and Tobago.