TEHRAN (defapress)- French prosecutors opened a terror investigation into a deadly knife attack at a police prefecture in Paris on Thursday.
News ID: 78908 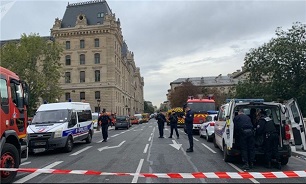 The investigation that has been carried out by the Paris public prosecutor is now handled to the anti-terrorist prosecutor's office (PNAT).

According to the French Le Parisien outlet, the suspect came in sight of the law enforcement agencies after the 2015 Charlie Hebdo attack.

On Thursday, a knife-wielding assailant, reportedly an employee of police headquarters in the isle of Cite, was shot dead after he had managed to kill at least four officers and injured another one.

Following the attack, police searched the home of the suspected perpetrator, while taking his wife in custody.

The same day, it was reported that an investigation was opened into deliberate homicide and attempted murder of public service authorities.