TEHRAN (defapress) – Sterling jumped in early London trading on Tuesday and hit a five-month high versus the euro after the European Union's chief Brexit negotiator said a deal with Britain over the terms of their divorce was still possible this week.
News ID: 78941 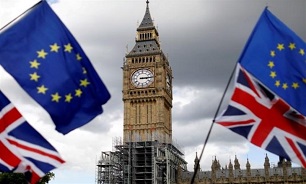 The pound rose as much as 0.7% to $1.2699 and by a similar magnitude against the euro to 86.90 pence after Michel Barnier said a deal was still possible.

Sterling came off those highs after Barnier said a deal, while achievable this week, was more and more difficult, Reuters reported.

The British currency has enjoyed a huge rally since late last week, when London and Brussels said they would restart intense negotiations to try and agree a Brexit deal before Britain's scheduled departure date of Oct. 31.