Pelosi Fires Back After Trump 'Meltdown': 'We've to Pray for His Health'

TEHRAN (defapress)- Speaker Nancy Pelosi (D-Calif.) stated that "we have to pray" for President Donald Trump's health after what she described as a "meltdown" during a meeting at the White House on Wednesday, marking an escalation in her depiction of the commander in chief.
News ID: 79024 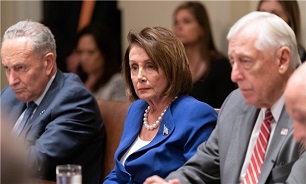 "I pray for the president all the time and I tell him that. I pray for his safety and that of his family. Now we have to pray for his health, because this was a very serious meltdown on the part of the president," Pelosi said at a press conference after returning to the Capitol, The Hill reported.

A reporter later sought to clarify if Pelosi was suggesting that Trump is mentally unwell.

Pelosi and other top Democrats walked out of a meeting with congressional leaders of both parties at the White House about Trump's decision to withdraw US troops from Northern Syria.

The withdrawal opened the door for Turkey to begin an onslaught against Syrian Kurdish forces that were allied with Washingtonin the fight against ISIL (also known as ISIS or Daesh).

Democratic leaders stressed that the meeting quickly derailed after Pelosi brought up the House passage of a bipartisan resolution earlier Wednesday afternoon by a 354-60 vote, which rebuked Trump's decision to withdraw the troops.

Pelosi and Senate Minority Leader Chuck Schumer (D-N.Y.) pressed Trump for what the plan would be going forward in Syria.

From there, Democrats said, Trump made it personal with Pelosi, as he sought to blame former President Barack Obama's policies for the current situation in Syria, according to a Democratic aide.

"At that point in time, the meeting very shortly thereafter deteriorated into a very disrespectful assertion about the Speaker of the House," House Majority Leader Steny Hoyer (D-Md.) noted.

Pelosi said that Trump called her a "third-grade politician".

Moments earlier, Schumer had stated while standing beside Pelosi before the media at the White House that Trump had called her a "third-rate politician".

Whatever the insult, Democrats decided that remaining in the meeting would be unproductive.

"This is not useful," Hoyer said in the meeting, according to a senior Democratic aide. Hoyer and Pelosi then left the meeting, followed by Schumer shortly after.

As they left, Trump said, "Goodbye, we'll see you at the polls."

Trump also questioned Pelosi's opposition to ISIL at one point, according to the Democratic aide.

"I hate ISIS more than you do," Trump said to Pelosi, and Pelosi replied, "You don't know that".

Pelosi also said during the meeting that Russia had long sought a "foothold" in the Middle East and Trump's decision to pull out the troops subsequently offered an opportunity.

"All roads with you lead to Putin," Pelosi told Trump.

"The President was measured, factual and decisive, while Speaker Pelosi’s decision to walk out was baffling, but not surprising. She had no intention of listening or contributing to an important meeting on national security issues. While Democratic leadership chose to storm out and get in front of the cameras to whine, everyone else in the meeting chose to stay in the room and work on behalf of this country," Grisham announced in a statement.

The blowup came during the first White House meeting between Trump and Pelosi since House Democrats formally launched an impeachment inquiry into his efforts to get the Ukrainian government to investigate former Vice President Joe Biden, a potential 2020 rival.

And it's only the latest White House meeting between Trump and Democratic leaders to end in finger-pointing.

In late May, a White House meeting on infrastructure quickly devolved into chaos when Trump walked out, citing Pelosi's comments earlier in the day accusing him of engaging in a "cover-up".

"I pray for the president of the United States," Pelosi told reporters a day after the May meeting, adding, "I wish that his family or his administration or his staff would have an intervention for the good of the country."

Pelosi dismissed the notion that Democrats cannot work with Trump given the track record of meetings that have ended in blowups.

"Does that mean we can't have future meetings? No. Just depends on the subject, I guess. Does it mean we can't pass things working together? If we can, we will," she stated.

"But there has to be some level of values, of calmness, of patriotism, a love of our country and our system, and not a personal invective because he didn't like the way a vote went on any given day," Pelosi added.