TEHRAN (defapress) – A senior Iranian lawmakers the United States and Saudi Arabia have not been able to affect historical Iran-Iraq relations, adding that the Arbaeen trek has been immune against the plots.
News ID: 79039 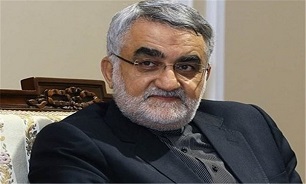 Alaeddin Boroujerdi, a member of Parliament National Security and Foreign Policy Committee told Mehr correspondent on Saturday that “the US policy in Iraq was to occupy the country. They were trying to make Iraq one of the US states, but the Islamic Republic of Iran along with the Iraqi people and government defeated the United States and will continue to support the Iraqi people and government.”

While ISIL was operating in Iraq, the Islamic Republic together with the Iraqi, Syrian and Russian governments set up a joint operation room in Baghdad and Damascus, the senior lawmaker added.

He also said that the United States and Saudi Arabia have failed to affect historical Iran-Iraq ties, adding that they have been trying to negatively affect public participation in the Arbaeen trek.

Saudi Arabia and the US are angry about Iran's policies in Iraq and Syria and have engaged in military, propaganda campaigns and political confrontation against Iran, according to Boroujerdi.

Referring to the meetings of Iraqi religious authorities in charge of Arbaeen processions as well as senior Iraqi cleric Muqtada al-Sadr with the Leader of the Islamic Revolution Ayatollah Khamenei in Tehran recently, he added that the US and Saudi Arabia are discontent with such meetings and are angry that Ayatollah Khamenei has a special place in Iraq and the region.

But, he added, that their anger will get nowhere.

The senior Iranian lawmaker also noted that Saudi Arabia has been trying recently to gain the support of Muqtada al-Sadr, that is why his meeting with the Leader of the Islamic Republic of Iran was crucial.

It is noteworthy that every year, millions of Shia Muslims even Sunni Muslims, Christians and Zoroastrians, etc. from various nationalities depart for the holy Iraqi cities of Najaf and Karbala to commemorate the 40th day (Arbaeen in Arabic) after the martyrdom of Imam Hussein (PBUH) in the battle of Karbala on Ashura Day in 680 AD.