No Sign of US Cyber Attack after Drone Downing

TEHRAN (defapress)- Head of Iran's Civil Defense Organization Brigadier General Gholamreza Jalali rejected Washington’s claim that the US responded Tehran’s downing of an American spy drone over the Strait of Hormuz with a cyberattack, saying that there is no evidence to substantiate the claim.
News ID: 79050 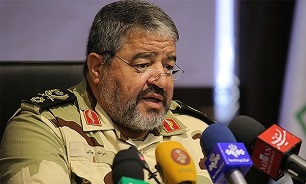 “Americans have claimed that they responded to their drone's downing [by Iran on June 20] with a cyberattack, which was not proved based on our findings, and we have found no sign of a cyberattack,” Brigadier General Jalali said on Monday.

The IRGC Aerospace Force shot down an American spy drone over the territorial waters of Iran near the Strait of Hormuz at dawn on June 20.

After the incident, US President Donald Trump claimed the US air force was “cocked and loaded” to attack three Iranian targets, but he called off the strike with 10 minutes to spare after being told that the airstrike might kill as many as 150 people.

The same news outlet quoted an unnamed senior American official in late August saying that a secret cyberattacks against Iran in June wiped out a critical database used by Tehran.

Elsewhere in his remarks, Jalali said that the Civil Defense Organization has devised counter-offensive plans for all of the country's executive agencies in different areas, adding that the plans have been tested in drills and exercises.

“We conducted exercises in five defensive areas in the past year [of the local calendar between March 21, 2018- March 20, 2019]. According to the decision of the Supreme Council of Cyberspace, the exercises were based on the functioning of cyberspace and the Internet,” he recounted.

“At one stage of the exercises we came to the conclusion that 85% of the country's infrastructures can keep operating if the Internet is cut off. Since then we have conducted 15 other exercises, and we are going to stage 64 exercises in the next two months,” the commander added.

He added that 380 exercises were conducted at Iranian schools during the last local calendar year between March 21, 2018 and March 20, 2019.

Jalali went on adding that the country's bodies and organizations have also conducted 1,000 power outage drills.

“This year we have carried out 2 nuclear exercises at the Bushehr Nuclear Power Plant, according to the requirements of the International Atomic Energy Agency (IAEA), but they were not covered by the media. This year, we will have the same exercise in the Tehran Nuclear Power Plant,” he said.

According to the official, Iran is going to conduct biological defense exercises in the provinces of Azerbaijan and Khorasan.

He then said that chemical warfare drills have been conducted in the two Persian Gulf port cities of Assaluyeh and Mahshahr, where the entire health infrastructure and medical capacities of the regions were called up.

“On the island of Khark, we staged exercises focused on evacuating population. We also had two signal cut-off exercises in the Islamic Republic of Iran’s Broadcasting (IRIB) and assumed elimination of Tehran's centrality, and the exercise showed that the IRIB enjoyed high capabilities in this area,” Jalali highlighted.

Earlier this month, Jalali said that his country is seriously following up the case of the United States' repeated cyber-attacks against its energy sites, adding that Tehran has now developed a tight security system for countering such hostile moves.

"The Americans have repeatedly threatened and mounted cyber-attacks against us," Jalali said on October 06.

"The legal implications of such actions could naturally affect them and Iran is seriously following up the issue at its juridical and foreign ministry capacities," he said, adding that Iran is putting in place robust security measures to protect its vital infrastructure.

Last month, US media reports said the United States was considering possible cyber-attacks against Iran after the September 14 attacks on Saudi oil sites which Washington was quick to blame on Iran without evidence.

Jalali said, "Our task is to enhance our cyber defense preparations in the energy and other critical areas."

The official said his office has been upgrading its preparations through special drills held periodically, in which emergency response teams identify and fix weaknesses and security holes in simulated cyber-attacks.

"In the last six months, we have had almost 120 drills and tests, about 70% of which were in the energy field, controlling all refinery, petrochemical, gas, transfer, central and control systems and resolving almost all weaknesses," Jalali said.

"Our enemies consider the cyber domain as one of the main areas of threat against nations, especially Iran,” Jalali said then, calling for security at industrial installations to be beefed up.

Last month, Iranian Foreign Minister Mohammad Javad Zarif lashed out at Washington for launching a cyber-attack against nuclear facilities in his country, reprimanding the White House for irresponsibly ignoring the fact that the attack could have claimed millions of civilians lives.

In an interview with NBC's "Meet The Press," Zarif referred to Stuxnet, a malicious computer worm that is widely believed to be have been made by the US and Israel.

"There is a cyber-war going on. The United States started that cyber war, with attacking our nuclear facilities in a very dangerous, irresponsible way that could've killed millions of people," he said.

"There is a cyber-war and Iran is engaged in that cyber war," he added. "Any war that the United States starts, it won't be able to finish."

Asked whether Iran was attempting to interfere with the 2020 US presidential election, Zarif said the Islamic Republic doesn't have a preference in the race.

"We don't have a preference in your election to intervene in that election," he said. "We don't interfere in the internal affairs of another country."

The Washington Post reported in June 2012 that the US National Security Agency (NSA), its spy service CIA, and Israel’s military had worked together to launch Stuxnet against Iran’s nuclear facilities.

In November 2016, Head of the Atomic Energy Organization of Iran (AEOI), Ali Akbar Salehi said the cyber-attack had worked against the US and Israel’s intended objectives and instead helped improve the Islamic Republic’s readiness against such acts of sabotage.

The deployment of the malware against Iran’s nuclear facilities had made the country realize how it had to prepare against such attempts, Salehi said at the time.

This May, Minister of Information and Communications Technology Mohammad Javad Azari Jahromi announced that Iran has developed an indigenous firewall securing its sensitive industrial facilities against Stuxnet.