Syrian Democratic Council Seeking Union with Damascus after US Betrayal

TEHRAN (defapress)- Co-Chair of the Syrian Democratic Council Riad Hammoud Darar, after being disappointed by the US, said that the council is now pursuing real cooperation with Damascus to achieve an understanding that would bring stability to the country.
News ID: 79065 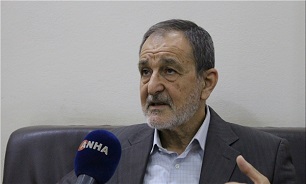 Darar, who co-chairs the Syrian Democratic Council (the political wing of the Syrian Democratic Forces, which is largely comprised of Kurdish militias), in an interview with the Lebanese newspaper al-Akhbar, said that the rapid developments in Northern and Eastern Syria will cost more territorial disintegration of Syria in favor of Turkey’s interests, adding that the US offered new land to Turkey to rectify its strained relationship with Ankara and return it to NATO.

He added that the agreement between the US and Russia is based on the fact that the resolution of the Syrian crisis will be achieved in a step-by-step process which would require all sides give up their extreme positions.

"Syrian democratic forces have always been discussing future relations with Damascus in order to reach a real and meaningful cooperation that would provide stability and give all Syrian groups and tribes the right they deserve," he said.

Darar emphasized that the experience of autonomy and self-management which was used to fill the administrative void in Northeast Syria is subject to debate and reform to achieve a mutually beneficial structure fit for all parties.

The head of the Syrian Democratic Council voiced hope that Russia’s mediation would lead to agreements that would reward them political contribution and participation through fair and respectful elections.

“The [new] accord that allows the Syrian army to enter into Kurdish-controlled areas is to promote the constructive role of the Syrian Armed Forces in protecting its sovereignty and borders, and Syrian democratic forces will ultimately be part of the Syria's National Army,” he highlighted.

On the other hand, Commander the Syrian Democratic Forces (SDF) Mazloum Kobani met with a Russian delegation on Monday at the Qamishli airport in al-Hasakah province. The delegation’s visit to Qamishli was for conveying the Kurdish demands to Damascus and strengthening military cooperation between the Syrian government and the Kurds, having an eye on the possibility of converting it into a comprehensive agreement.

A Kurdish official, in an interview with al-Akhbar, said that the US decision to keep part of its troops on Syrian soil was meant to encourage Kurds not to give Damascus more concessions.

Al-Akhbar wrote that considering fast developments undergoing in Northeast Syria and with the truce between Turkey and the Syrian Democratic Forces looming to its final hours, all eyes are now set on a meeting between the Turkish and Russian presidents who are expected to lay out plans for the future of North and East Syria.

While the Kurds are optimistic about the new US position on keeping some of its troops in Northern Syria, they also feel concerned about an imminent military operation by Ankara to threaten areas along Ras al-Ain to al-Maliki, and even reach the borderline between Syria and Iraq through Al-Maliki and even extend its reach to Deir Ezzur and al-Raqqa.

According to the report by the Lebanese paper, if Turkey continues to press on, Washington will give up its decision to stay close to oil wells, which will put the Kurds back on track with the Syrian government. However, Kurdish sources familiar with the course of meetings between the Russians and the Kurds believe that the situation is not going to escalate significantly and Russia is trying to broker an agreement in a near future to secure the border with Turkey at al-Hasakah.

US President Donald Trump said on Monday that Washington will deploy a small number of its troops in Syria, near the border with Jordan.

"US forces leaving Syria will initially be moved to other areas but will eventually return to the United States," he added.

"The US has never promised to stay in Syria for 400 years to support the Kurds," Trump said.

US Secretary of Defense Mark Esper said on Monday that some units of Washington’s troops may remain in the areas near the oil fields in Northeast Syria to protect them against possible attacks by the ISIL and extremist groups.

Al-Akhbar added that although Esper did not specify a time limit for the deployment of troops in Syria, his statement indicates that they remain at their bases near the Conoco, Al-Amar and Remilan oilfields in Deir Ezzur and al-Hasaka.