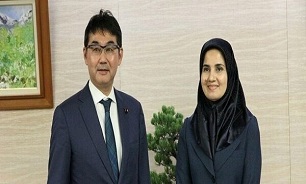 “The Islamic Republic of Iran is ready to cooperate with Japan in relevant legal and judicial issues,” Joneidi said during the meeting in the Japanese capital on Thursday.

She also placed special emphasis on the issue of diplomacy in legal affairs and cooperation between the two countries in training and research fields by the two countries’ faculties of law and bar associations.

The Japanese justice minister, for his part, expressed his special thanks for Joneidi’s presence in the enthronement ceremony of Japan's new Emperor Naruhito, and added, “I visited Islamic Republic of Iran in 2016 in the position of special adviser to Japanese prime minister and held constructive talks with the Iranian officials. In my visit to Iran, I found out that Iran and Japan enjoy good capacities for broadening of mutual relations in the related fields.”