North Korea to Discuss Denuclearization Only After US Abandons Hostile Policies

TEHRAN (defapress)- Pyongyang is ready to discuss the denuclearization process with Washington after the latter renounces its hostile stance on North Korea, Choe Ryong Hae, the president of the Presidium of North Korea's Supreme People's Assembly stated on Saturday.
News ID: 79091 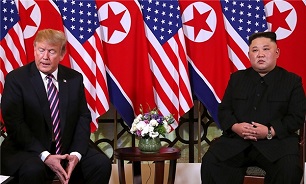 "The current international situation resembles the beginning of the Cold War. The situation on the Korean island is critical, we are faced with a serious crisis that needs to be resolved," Choe said at the summit of the Non-Aligned Movement in Baku, Sputnik reported.

"After signing the agreement between North Korea and the United States, the situation is not improving. The US should abandon hostility towards North Korea, as well as its military and political provocations," Choe added.

Earlier in October, the North Korean delegation led by chief negotiator Kim Myong Gil held working-level denuclearization talks with the US delegation headed by Stephen Biegun in Sweden. These were the first talks since the high-level summit in Hanoi in February. However, North Korean diplomats left the meeting's venue prematurely, after which Kim noted the working negotiations with the United States had failed. According to the diplomat, the United States came empty-handed.

North Korea has been engaged in denuclearization talks with the United States since 2018. The country's leader Kim Jong-un and US President Donald Trump expressed their commitment to the denuclearization of the Korean Peninsula during talks in Singapore last June. However recent negotiations between the two leaders in Vietnam collapsed due to disagreements over the timing of sanctions relief.